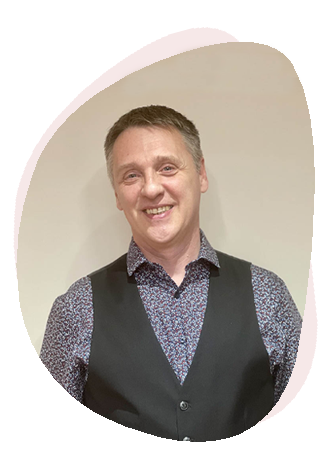 John trained as a first study singer at the Birmingham Conservatoire under Keith Darlington. He later studied with the baritone specialist at the Royal Academy of Music in London, Glenville Hargreaves.

During this time John gained his teaching Diploma for Voice and his Music Degree from the Conservatoire as well as a performance Diploma from Trinity College London.

Currently John teaches singing at Marcia’s Dance Centre in Calpe as well as performing solo work for various groups around the Costa Blanca. John is a member of the Spanish Chamber Choir Contrapunctum in Alicante, where he also helps with choir training and founded the music group 152 also in Alicante.

John was a member of the Bass Section of the Choir for a year or so in 2009 and joined the musical staff in October 2018. John has Directed the Choir since September 2019.

We store and/or access information on a device, such as cookies and process personal data, such as unique identifiers and standard information sent by a device for personalised ads and content, ad and content measurement, and audience insights, as well as to develop and improve products.

By clicking “Agree”, you consent to our processing as described above and to the use of ALL the cookies. Alternatively you may access more detailed information and change your preferences before consenting or to refuse consenting.

Please note that some processing of your personal data may not require your consent, but you have a right to object to such processing. Your preferences will apply to this website only. You may visit "More Options" to provide a controlled consent.
MORE OPTIONSAGREE AND CLOSE
Manage consent

This website uses cookies to improve your experience while you navigate through the website. Out of these, the cookies that are categorized as necessary are stored on your browser as they are essential for the working of basic functionalities of the website. We also use third-party cookies that help us analyze and understand how you use this website. These cookies will be stored in your browser only with your consent. You also have the option to opt-out of these cookies. But opting out of some of these cookies may affect your browsing experience.
Necessary Always Enabled
Necessary cookies are absolutely essential for the website to function properly. These cookies ensure basic functionalities and security features of the website, anonymously.
Functional
Functional cookies help to perform certain functionalities like sharing the content of the website on social media platforms, collect feedbacks, and other third-party features.
Performance
Performance cookies are used to understand and analyze the key performance indexes of the website which helps in delivering a better user experience for the visitors.
Analytics
Analytical cookies are used to understand how visitors interact with the website. These cookies help provide information on metrics the number of visitors, bounce rate, traffic source, etc.
Advertisement
Advertisement cookies are used to provide visitors with relevant ads and marketing campaigns. These cookies track visitors across websites and collect information to provide customized ads.
Others
Other uncategorized cookies are those that are being analyzed and have not been classified into a category as yet.
SAVE & ACCEPT
Powered by

0
0
Your Basket
Your basket is empty
Continue